With the development of short-range wireless communication technology, technologies such as WLAN, Bluetooth, IrDA, HomeRF, and ZigBee have been gradually applied in many fields such as smart home, industrial control, and environmental monitoring, and speech recognition technology has been used as an interdisciplinary subject. Widely used in industries, home appliances, medical and other fields. The combination of speech recognition and wireless communication technology in the field of smart home enables people to directly control home appliances through voice, enabling people to enjoy the application of modern technology in real life. ZigBee communication technology based on IEEE 802.15.4 protocol has the characteristics of low power consumption, low cost, short distance, safe and reliable, self-organizing network. This paper combines the 16-bit SPCE061A MCU with rich voice processing function and the RF chip CC2530 to design the ZigBee speech recognition node. It can communicate with the smart home control gateway based on SUMSUNG S3C6410 development platform. The gateway is processing. After the information, the state of the control device can be displayed, and communication with multiple child nodes in the home through the ZigBee wireless network, thereby realizing voice intelligent control of the home appliance. 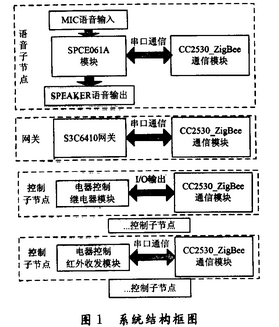 (1) Gateway. The Samsung S3C6410 processor based on the ARM11 architecture is used to communicate with the ZigBee master node through the serial port. S3C6410 is based on ARM1176JZF-S 16/

32-bit low power consumption, high performance RSIC general purpose processor. Its development platform has a wealth of peripheral interface resources. Among them, it can support 4 UART interfaces, support DMA and Interrupt mode, and the maximum speed can reach 3 Mb/s. The ZigBee master node starts and controls the ZigBee network as a coordinator when the system is started. When the network is established, it is responsible for receiving control information of the voice node and transmitting corresponding control information to each ZigBee child node.

(2) Voice sub-nodes. It consists of Sunplus Technology's SPCE061A microcontroller and ZigBec transceiver node module. SPCE061A is a 16-bit microcontroller with Sun'n SPTM as the core. It has 8-channel 10-bit A/D conversion input function, built-in microphone input mode with automatic gain control function and audio output function of dual 10-bit DAC mode. When using the SAC M_S240 Sunplus audio coding method, it can accommodate up to 210 s of voice data. Therefore, it is widely used in the field of digital speech recognition.

(3) Electrical control relay sub-node. It consists of a relay module and a ZigBee transceiver node. Since the mains voltage in China is around 220 V, in order to realize the control of some household appliances switches, the relay module is adopted, and the I/O pins of the CC2530 chip of the ZigBee communication module and its peripheral driving circuit are used to realize the connection of the relay module. With release control. It can control switch type electric appliances such as curtains and lights.

(4) Infrared control subnode. It consists of a learning infrared control module and a ZigBee transceiver sub-node. At present, the proportion of household appliances of the infrared remote control type is gradually increasing. Therefore, this paper uses a learning infrared control module in the design research, which communicates with the ZigBee transceiver sub-node through the serial port. First, use one or more infrared modules to learn the signals of the infrared remote controllers of existing home appliances (such as TVs, DVDs, air conditioners, projectors, etc.), and store the corresponding codes in the memory of the infrared module E2PROM, each code Corresponds to an address. When

When the ZigBee node receives an instruction and needs to control a certain home appliance, the infrared module will transmit the infrared emission coded data under the address according to the instruction, thereby realizing the voice control of the infrared type household appliance.

The main program flow chart of the host computer is shown in Figure 2. 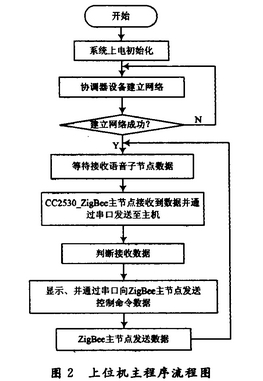 The UART data format of the single-chip SPCE061A is only one type, and serial communication with the CC2530 module is required according to the specified data format. The program was developed under Sunplus's Î¼'nSP IDE integrated development environment, and uses the speech processing functions and function libraries provided by Sunplus Technology. The flow sub-node program flow chart is shown in Figure 3. 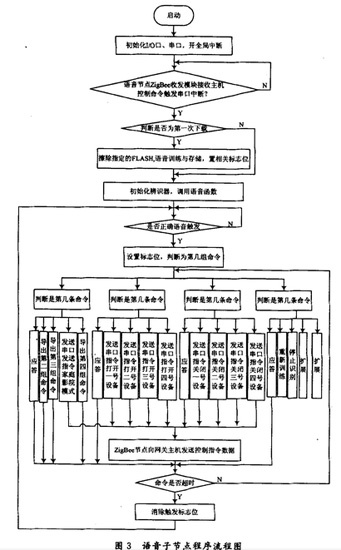 In order to realize the "re-training" and "stop recognition" control of ZigBee voice sub-nodes by using voice commands, it is convenient for practical application. In this paper, goto unconditional statements are used in the program design process. Some program source code is as follows: 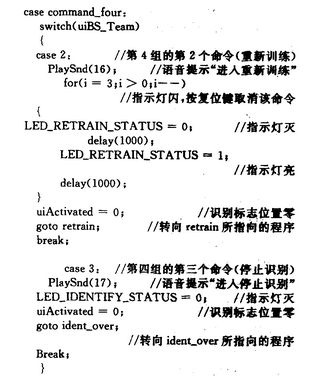 When using the learning infrared transceiver module to control the infrared appliance, the control signal must first be learned, and the code to be transmitted corresponds to the serial port command output by the CC2530. The program flow chart of the control command electric appliance infrared control ZigBee sub-node is shown in Fig. 4. 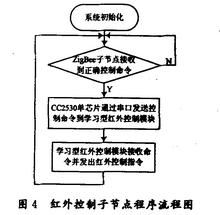 The nickelâ€“cadmium battery (NiCd battery or NiCad battery) is a type of rechargeable battery using nickel oxide hydroxide and metallic cadmium as electrodes. The abbreviation NiCd is derived from the chemical symbols of nickel (Ni) and cadmium (Cd).