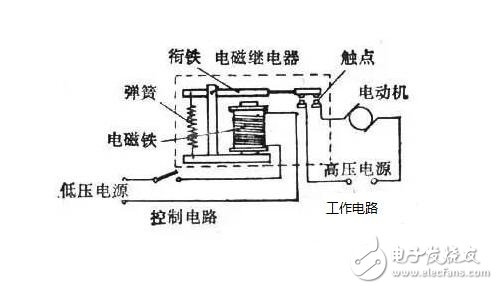 Relays are mainly divided into general relays and solid state relays. A general relay converts a control signal into a mechanically operated electromagnet and a switch electrical switch. The intermediate relay is one of the most basic relays.

The solid state relay is a contactless relay. It consists of microelectronic circuits, discrete electronic devices, and power electronic power devices. Can be divided into input circuit, electrical isolation part, output circuit composition. As shown in the figure below is a schematic diagram of a typical solid state relay circuit:

Mainly refers to the altitude, ambient temperature, humidity, and electromagnetic interference and other factors. Considering the universal applicability of the control system, taking into account the special nature of reliable operation for many years, the key parts of the device must be fully sealed with high insulation and strong electrical resistance (metal cover sealing or plastic sealing type, metal cover sealing products are better than plastic sealing products) ) Intermediate relay products. Because only fully sealed relays have excellent long-term tolerance to harsh environmental performance, good electrical contact stability, reliability and switching load capacity (not affected by external climate).

2 Mechanical action elements mainly refer to stress, impact, impact and other stress factors. For the control system, the anti-seismic stress effect and the anti-mechanical stress acting ability are mainly considered, and a small intermediate relay adopting a balanced armature mechanism should be selected.

4, control voltage, must know the actual use of the control voltage, also known as coil voltage. Generally, the relays are given the rated control voltage, but in general, the relay is activated at about 70-80% of the rated voltage. The relay reset does not mean that there is no voltage to reset. In fact, the general situation is less than 15% to ensure reset. So if the control loop has a leakage voltage. Need to consider this impact. The state of action between them is not clear enough.

6, voltage and current, also known as contact capacity or load capacity, actually includes voltage and current. But in fact, when choosing, it must be determined separately. To give a clear load voltage, and load current to better confirm the relay that can be selected. Another type of load that needs special attention is the type of load. Here only need to remember under the inductive load. Its junction voltage and current are smaller than under resistive loads. This difference will be stated in the intermediate relay data.

7, the installation method, why is the installation method different? This is because the intermediate relay is generally not directly equipped with a base. When selecting a good relay, you need to confirm the base model. In the industrial control environment, the rail mounting method is actually used. This type of base is also used the most. Also like the pcb board soldering base. The back is connected to the base. In fact, this choice is not to choose the relay but to choose the base.

Any automation equipment must actually determine the actual load characteristics and load value required. It is especially important to choose a suitable relay product. The failure or reliability of the relay is unreliable, mainly referring to whether the contact can complete the function of the specified switching circuit. If the actual load of the switch is inconsistent with the switching load specified by the selected relay, reliability will not be discussed.

KNB2-63 Mini Circuit breakers, also named as the air switch which have a short for arc extinguishing device. It is a switch role, and also is a automatic protection of low-voltage electrical distribution. Its role is equivalent to the combination of switch. Fuse. Thermal Relay and other electrical components. It mainly used for short circuit and overload protection. Generally, According to the poles, mini Circuit breaker can be divided into 1P , 1P+N , 2P, 3P and 4P.