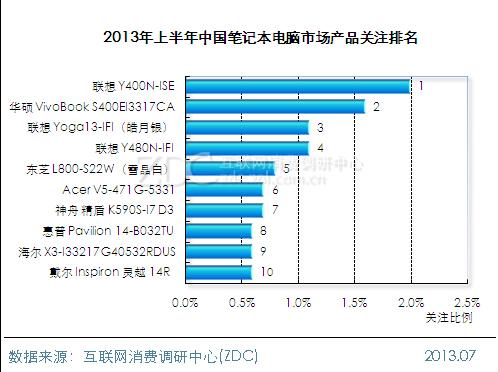 â€¢ Brand focus: The top fifteen major brands dominated the overall notebook market, accounting for more than 90% of the attention ratio. Lenovo dominated the game and the top three players have a solid position.

â€¢ Price segment structure: High-end price laptops have the highest degree of attention, among which laptop computers with 3000-4999 yuan account for nearly 50%.

â€¢ Processor Architecture: The Intel Core i5 3 Generation Series has become the most watched processor for two consecutive quarters.

â€¢ Screen size structure: 14-inch notebooks are the most popular, and 15.6-inch laptops are the runners-up.

â€¢ Analysis of mainstream brands: The pattern of brand awareness remains stable and Lenovo is far ahead. Asustek has a relatively high number of mid-to-low-end price products.

â€¢ Brands are concerned about the overall pattern of stability

In the first half of 2013, the overall attention of the Chinese notebook computer brand remained stable, with the first tier led by Lenovo, Asus, and Hewlett-Packard accumulating more than 50% of the total attention, and other brands accounted for less than 10%.

In terms of product type, traditional notebooks still occupy the dominant position of attention. However, with the pursuit of "portability", "appearance" and "performance" by users, the proportion of ultrabooks has maintained a steady upward trend.

â€¢ The price focus is mainly on high-end notebooks

High-end price laptops have become the mainstream of consumer attention, and major computer makers are also focusing on the concept of â€œlightweight and portableâ€ and â€œultrabookâ€ in the mid- to high-end price line.

With the "high experience" and "low energy consumption" becoming the main demand of users, the discrete graphics cards and dual graphics cards have established their dominant position in the product attention pattern.

The processor market is dominated by Intel, with the Core i5 3 generations being the most concerned, reflecting the concentration of consumer attention on products loaded with Intel processors.

â€¢ Lenovo pushes the pack, with the top three most concerned

In the first half of 2013, Lenovo (including ThinkPad) beat major computer makers by 29.1%, while Asustek and Hewlett-Packard ranked second and third respectively with 14.1% and 11.4%. All other brands are less than 10%. In addition, the top ten brands accounted for 94.3% of the attention ratio, and the brand focused on the higher concentration.

Comparing the pattern of brand awareness in the notebook market in the first and second quarters, Lenovo and Asustekâ€™s attention ratio declined 0.2% and 0.9%, respectively, in the second quarter, but their status as champions and runners-up was firm and accounted for more than 40% of the notebook computer market. Judging from the brand rankings, the top fifteen major brands have remained unchanged except for the eighth-placed Samsung and the ninth-placed Sony.

Third, the product focus on the pattern

â€¢ Lenovo Y400N-ISE is the most watched

In the first half of 2013, laptop products were concerned about the rankings. Lenovo's Y400-ISE had the highest proportion of attention and became the most watched notebook product. The product price was 6,500 yuan, and the Core i7 processor was used. The Asus VivoBook S400EI3317CA was ranked second in the second place. .

From the perspective of the brand to which the product belongs, Lenovo's three products entered the top ten, and ASUS, Toshiba, Acer, Shenzhou, Hewlett-Packard, Haier and Dell each had a product list.

From the product type point of view, there are four products in the top ten products that are ultra-portable, lightweight and portable. It can be seen that the ultrabook is attracting more and more attention from users, and thinness and portability are becoming the main products of notebook computers. Features.

In terms of product parameters, among the top ten products, there are five products that use Core i5 series processors and three models Core i7. At the same time, the number of notebooks with a screen size of 14 inches is the largest, reaching eight.

By comparing the number of products in the first half of the year and the degree of attention, we can see that the sales volume of ultrabooks in the first half of the year accounted for only 13.1% of the number of laptops, but they received 22.4% of users' attention, reflecting the potential of the ultrabook itself. In the market environment where product â€œperformanceâ€, â€œshapeâ€ and â€œportabilityâ€ are continuously increasing, there will be some room for growth in the ultrabook in the future.

In the second quarter, product attention in the price segment of 3000-5999 yuan was 3.1 percentage points lower than that in the first quarter, but mid-end price products still accounted for more than half of market attention. In contrast, the degree of attention of products above 6,000 yuan and below 3,000 yuan has rebounded. The price of products under 3,000 yuan has risen by 1.5 percentage points. It can be seen that the high-end, high-configuration, and low-end price advantage of high-end price products are affected. The user's attention.

â€¢ The highest level of attention for discrete graphics

In the first half of 2013, the 500GB hard drive demonstrated its dominant position in the notebook market with a 41.4% focus. 750GB and 1TB are ranked second and third respectively with 12% and 11.7% attention. As a whole, the high-capacity hard disk products in the notebook computer market in the first half of the year attracted much attention from users. The attention rate of products with a hard disk capacity of 500 GB or more was 65.1%, reflecting the consumers' preference for large-capacity hard disks.

Solid-state drives have the advantages of "no noise", "fast speed", "stability", and "small size", and have attracted more and more attention from users since their launch. From January to June, the attention of products using solid-state drives (including hybrid drives) maintained an overall upward trend, reaching the highest value of 29.2% in June.

(I) Focus comparison of mainstream brands

In the first half of the year, the pattern of attention of notebook brands remained stable, and the changes in the attention levels of major brands did not exceed 1%, reflecting that the competition in the notebook computer market was still among mainstream brands.

â€¢ Lenovoâ€™s attention is far ahead

(II) Comparison of price segments of mainstream brands in sales